On Sunday 10 March 2019, I took part in the Vitality London Big Half Marathon for the second year in a row. The Big Half is a large half marathon organised by the people behind London Marathon, starting at the iconic setting of Tower Bridge and finishing in Cutty Sark.

The Big Half was due to be my first half marathon of 2019, and a warm up race for Boston Marathon, so it was an important race for me, and a way for me to test my fitness. Training had gone really well in the lead up to this race. I did some nice relaxed long runs at 5:20/km pace, I had a fantastic cross country run the week before, and I was clocking some really fast times on the track (3:35/km pace on 1.2k reps), so I felt I was on form to get a new half marathon PB. I’ve been pretty stagnant on the half marathon front (getting 1h38 in two years in a row) so I was super keen to smash a good time.

Saturday – the day before the race

Before the race, there were fears that the race might get cancelled because of the 40mph wind. We spent much of the Saturday anxiously watching the weather forecast flip between rain, the stormy, then back to 40mph wind with showers in the morning. On Saturday evening, we got an email saying that the tents at the event village would be taken down due to the wind, which was less than ideal, but they confirmed that the race was going ahead!

So, just before heading to bed, I got my kit out ready to ensure I had everything I need. This is something of a ritual for me, and gives me confidence so I can wake up stress free in the morning.

It was an early start for us. We agreed to meet the other guys at our club at 7:45am at London Bridge station so we would have time for a photo and then make our way to our baggage tents before they closed at 8:20am. It was cold and wet, so we sheltered waiting at the station before taking a picture with everyone who had arrived. It was nice catching up with everyone as always.

After we dropped off our baggage, we headed off for the all-important pre-race pee, the general expectation was we’d have to wait for a good few minutes, but the queue was quite short and Melissa and I soon made our way to the orange pen. As it was quite congested we were stuck somewhere at the back of the pen.

Then off we went! Setting out I didn’t have a plan, except to see if I could maintain 4:25 pace over the half marathon distance. Melissa said she was aiming for a similar pace so we said we’d try and stick together. This lasted for about 800m, before I lost her in the crowds.

The first 5k went well. I was feeling comfortable and relaxed at just under 4:25 and was watching my pace. In the past I’ve always pushed too hard in the first part of a race and then have everything fall apart so I was careful not to do that. I passed quite a few people, but tried to keep a straight line, being careful not to waste too much energy with mini-detours.

Then I entered the Limehouse Link Tunnel. This was part of the route not covered by the London Marathon. It was over a mile and a strange experience to be running for so long through a tunnel. There I saw Amanda and George, who told me that Melissa and Amy were just up ahead. After a quick chat, I continued to make my way up the field, scanning the crowds in search of them as I overtook other runners.

Before I knew it, I was heading to Canary Wharf via cobbled streets. While I’m not a fan of running on cobbles, I have gone over these cobbled streets quite regularly during my long runs to work so they didn’t bother me that much. I caught up with Melissa and we ran for a while side by side as we headed to the heart of London’s financial district. 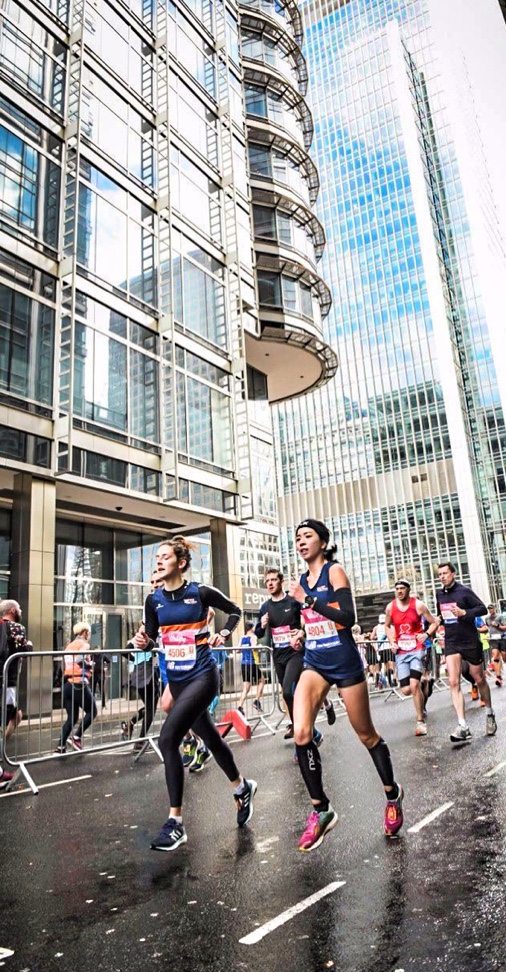 Passing Canary Wharf, I headed back up to the Old Highway, and then eventually onto Tower Bridge. There is something special about running across this bridge while being battered by great billows of wind that almost blew me off! I’ve gone over the bridge twice with the London Marathon, and also run across via the footpath many times on training runs, but nothing quite prepared me for the kind of wind that hit me. As I picked up my feet, I could feel my foot swaying like wheat in the wind. I had to lean right forward and keep my legs bent so I didn’t fly off sideways!

Then onto Southwark and Bermondsey and through some old parts of London, before winding back to Greenwich. There were several drink stops with small sports cap bottles of water and one stop with Lucozade in small edible and compostable blobs made from seaweed extract. Apparently they’re called “oohos”?! It was great and not messy like I thought it would be. I just put one in my mouth, burst it and discarded the package, although I could have probably eaten it.

At about 14-15k, I caught up with Amy and ran alongside her. It was nice to have some company and she really carried me through what was otherwise a long boring road. At 16k I decided to push ahead and see how much I could push the pace. I went from 4:20 pace down to 4:15, then 4:10, and at some point I was even doing 3:58 pace. At this point it was all flat/downhill so I knew I could go all out.

And then onto Greenwich and the finish line. The entry into Greenwich and the finish at the Cutty Sark was really well supported and noisy which really lifted the spirits. I loved crossing the line next to the Cutty Sark as this is an area I run regularly so it was really special to be heading home for the finish! Massive shout out to Kat and Julie who were cheering from the side line – and Sean who appeared out of nowhere to sprint the last 500m – it definitely gave me a boost seeing these guys and having that support!

Then I crossed the finish line! According to my Garmin, my time was 1h29*!! I was super surprised given how easy I felt throughout the race. Clearly my marathon training (combined with my swim interval sessions) is paying off. I even did negative splits and averaged something like 4:05/km at the end! This is a massive improvement to my time last year when I was running 1h38 and thought I was doing great. 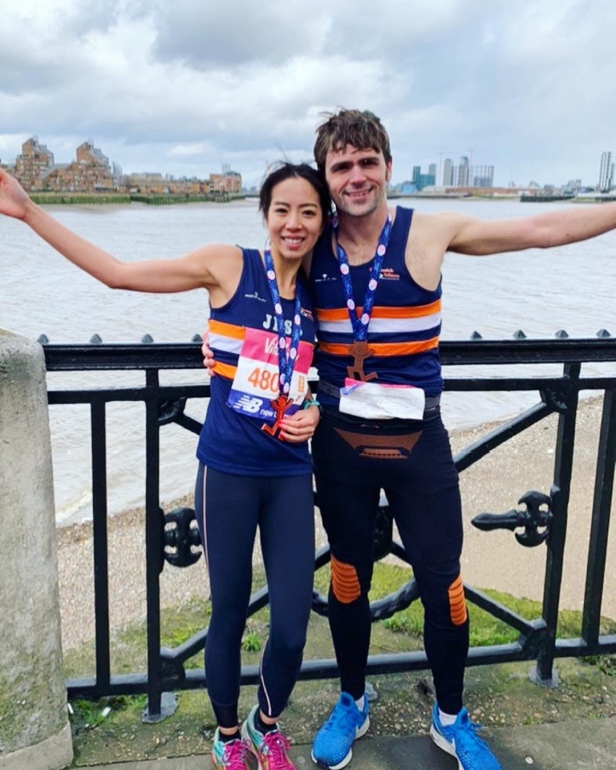 So, apart from the wind and the pre-race downpour of rain, I loved it. It was all the better knowing that everyone else also did incredibly well (Clinton smashed a new PB of 1.25, and Dan similarly got a new PB of sub 1.20). Melissa and Amy both got PBs, as expected.

Now, the MOST important question is, what did I do differently this year in preparation for this half marathon? I had to rack my brain hard for this one, because I didn’t really do anything that different.

But unlike last year, I also did some things differently:

So that’s it from me! Let me know if you have any thoughts/comments on the above. If there’s anything that worked well for you, leave me a comment/private message!

Next up: Boston Marathon!

*Clarification: My “official” time was actually 1h31, which is a bit annoying, but for the sake of a good story, I’ll stick with my Garmin time of sub-1.30!

Recent Posts: Wake Up and Run

Triathlete highs and lows: finding motivation in racing and training

First time track cycling… and I didn’t fall off!